Thought for the day
★ The way we support each other, the way we show our love to each other throughout the day, it's the little things that keep us going strong. ★
CHINMAYA FEST 2021
Mandatory Public Disclosure
ONLINE TEST
ONLINE ADMISSION
Sample Question Papers
Announcements

Swami Chinmayananda was on his first global tour. The queen of Vengunad, Radha Devi, was the president of Chinmaya Misison, Kollengode in Kerala. There was a request to start a school.

A part of the palace was offered and so the Chinmaya Education Movement (CEM) was started with the inauguration of a nursery school on May 20, 1965, with royal patronage by Shri KPS Menon (ex-ambassador to Russia). The Chinmaya nursery school grew and Swami Chinmayananda inaugurated the primary school on June 17, 1969, in a separate building near the palace. It has over time become a higher secondary school, with 555 students, a staff of 37, and structure and infrastructure

Growth over the years:

In 1966, Swami Chinmayananda first mentioned in a casual conversation that Chennai should have a Chinmaya Vidyalaya; the first of the seven Chinmaya Vidyalayas was inaugurated in October 1968 by the famous Bharatanatyam dancer Rukmini Devi Arundale. These Vidyalayas are considered amongst the best in this metropolitan city and are headed by Swami Tejomayananda who succeeded Swami Chinmayananda as the chancellor for all the Vidyalayas across Chennai and later India.

In the next 25 years (between mid-60 to 1980), 24 more Vidyalayas were established all over India, with 11 in Kerala, five Tamil Nadu, two each in Karnataka, Jharkhand and Odisha, one in Andhra Pradesh, and one in the metropolitan city of New Delhi.

Constructed in 1979, CV Delhi educated its first students in a small building, shifting later to its present site of nearly four acres in the sophisticated South Delhi suburb of Vasant Vihar. Swami Jyotirmayananda of Chinmaya Mission Delhi brought together man and material and forded through the political corridors of Delhi to give concrete shape to this Chinmaya Vidyalaya.

Between the years 1980 to 2013, more than 50 Vidyalayas were set up all over India. A notable one is the Chinmaya Hari Har Vidyalaya, Ellayapalle, in Andhra Pradesh. Started by Swamini Sharadapriyananda (a dynamic lawyer, Gandhian, and freedom-fighter turned sannyaasini and one of the senior-most disciples of Swami Chinmayananda) her passion was to serve the poorest of poor, giving them material succor and spiritual solace. As of 2012 there were over 80 Chinmaya Vidyalayas with over 75,000 students all over India.

The Chinmay Vidyalaya Badiadka was established in the 1989 with the leadership of Swami Viviktananda Saraswati.

The CCMT Education Cell is the governing body of the Chinmaya Education Movement. It is headquartered at 'Chinmaya Gardens' in Coimbatore, India. It was created to monitor, integrate, streamline, upgrade, standardise, and facilitate the efficient and effective maintenance and growth of all Chinmaya Educational Institutions.

The lamp in India always represents Knowledge. The mythical swan is said to have the ability to separate milk from water. The swan in the emblem represents the ability to distinguish between right and wrong, matter and spirit. Knowledge helps us make the right choices and reach the highest. 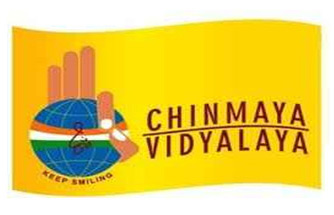 The globe stands for a universal outlook.

Downloads
More Downloads +
Connect with us
Get in Touch